Providing professional and compassionate animal services to the people and pets of Kern County through the promotion of responsible pet ownership and community resources, the prevention of animal cruelty, and the creation of a safe and healthy environment for lost, stray or homeless animals. 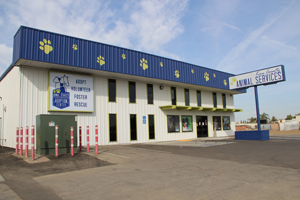 Kern County Animal Services is a department organization under the jurisdiction of the County of Kern. The primary function of Kern County Animal Services (KCAS) is to ensure public protection from dangerous domesticated animals and from diseases that can be transmitted from animals to humans. The primary activity of KCAS is the Rabies Control Program. The state law defining the Rabies Control Program includes requirements for the licensing of dogs, rabies vaccination for dogs, animal bite reporting, animal quarantine, stray animal services, and a shelter system. Other services provided to the public by KCAS include low-cost vaccination clinics; investigation of animal cruelty; dead animal removal and disposal; promotion of spaying and neutering; and public education.

The Animal Services Shelters are managed by the Shelter Supervisor who supervises employees at the Bakersfield shelter, and oversees the Lake Isabella shelter that is operated by a contractor. Staff at the shelters includes two Senior Animal Care Workers, Animal Care Workers, and office staff.

KCAS serves the unincorporated areas of the county, which includes the unincorporated municipalities of Frazier Park, Lamont, Mojave, Oildale, and Rosamond. KCAS provides all or partial field services, licensing services, and shelter services to the cities of Arvin and Tehachapi through contractual agreements.

Which agency provides my animal-related services?

California State law requires that all dogs in California must be licensed by the local agency providing animal control services. In Kern County a dog cannot be licensed until the owner can show proof of a current rabies vaccination for that dog.

In order to encourage the public to vaccinate their dogs, KCAS provides low-cost vaccination clinics at various locations throughout the county. Animal Services staff is present so participating owners can also license their dog(s).

KCAS responds to all reports of someone being bitten by an animal. An investigation follows and the animal is either quarantined by the owner or impounded at the shelter for a ten day period. An animal will be tested for rabies by the Department of Public Health if rabies is suspected based on the animal's behavior at the time of the bite report or during the quarantine period.

Animal Control Officers are in the field responding to reports of stray and abandoned animals, nuisance barking complaints, suspected abuse or neglect, and other domesticated animal complaints Monday through Friday from 8 am to 5 pm. After hours, on Saturdays and Sundays, and most holidays, officers will respond to reports of severely injured or ill animals and unrestrained dangerous animals. Residents are asked to contact the Sheriff's Department non-emergency line for these calls. Animals that are determined to have no known owner, or an owner that can't be reached, are impounded and taken to one of the Kern County Animal Shelters.

KCAS oversees two animal shelters. The largest shelter is located at 3951 Fruitvale Avenue in Bakersfield. The Bakersfield shelter is able to house and care for dogs and cats. A second satellite shelter in Lake Isabella is operated by a contractor, but owned by Kern County. In addition, both shelters can accommodate other animals; occasionally, larger domestic animals enter the shelter such as horses, goats, sheep and pigs as well as more exotic pets such as birds, lizards, and rabbits.

KCAS encourages residents in the unincorporated areas of Kern County to spay or neuter their cats or dogs to help prevent overpopulation of unwanted animals.

Where do you live?